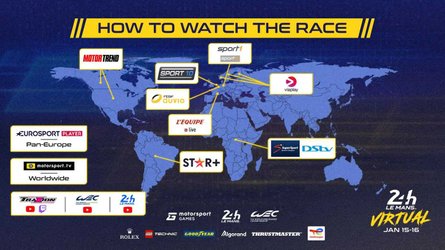 Miami, January 14, 2022 – A number of major broadcasters, including Motor Trend in the United States and Eurosport in Europe and Asia, will broadcast the final of the Le Mans Virtual Series, the 24 Hours of Le Mans Virtual, on January 15 and 16, 2022, bringing the exciting worlds of motorsport and eSports to millions of homes around the world. .

It will be the pinnacle of this year’s championship, which has been made possible by the joint venture between Motorsport Games (NASDAQ: MSGM) and the Automobile Club of the West (ACO).

A special broadcast covering this unique two-day event will be produced live from Paris with a team of experts including Martin Haven, FIA World Endurance Championship lead commentator, esports specialists Chris McCarthy and Lewis McGlade, motorsports commentator Ben Constanduros, as well as Hayley Edmonds, who will be reporting in the pits. Also in the studio will be consultant Alex Brundle, WEC driver, 2020 24 Hours of Le Mans Virtual competitor and FIA F3 and F2 commentator.

The 200 esports drivers, who represent 39 different nationalities and share 50 cars (with four drivers per car over the 24 hours) will be in 28 different countries. This perfectly reflects the interest of broadcasters around the world.

Eurosport will cover the entire two-day event live in Europe on Eurosport Player, and global coverage will be provided by Motorsport.tv. The entire 24 Hours will be broadcast by The Live Team in France, Sport 10 (pay TV channel) and RTBF Auvio (on request) in Belgium and Viaplay in Sweden, Norway and Finland. In Germany, Austria and Switzerland, the free channel Sport 1 will air a special 44-minute program on Sunday evenings, reaching up to 72 million viewers.

Motor Trend will cover the entire race live in North America on its on-demand service, while Star+ will broadcast the event in Latin America and Brazil. SuperSport DStv will assume live broadcasting on its dedicated motorsports channel in Africa; in other words, coverage will be on five continents.

Finally, the official ACO and FIA WEC social media accounts will show the race live from start to finish, as will the official Le Mans Virtual Series website (www.lemansvirtual.com). The broadcast will start at 1:30 p.m. French time, and the famous tricolor flag will signal the start of the biggest Endurance eSport event of the year at 14h.

For more information, including press releases, visuals, official poster and presentation, click here. All event information can also be found at www.lemansvirtual.com.